Here's a recent fall makeup look I tried out. It's more dramatic than what I usually wear, but it's fun for nighttime! I hardly ever wear fake eyelashes since my lashes are pretty thick on their own, but I had fun playing around with a pair for this look. 🙂 What do you think?

Sometimes people think purple is a difficult color to pull off, but I'm sharing a few tips that will make your life easier if you're going to experiment with it. It's definitely a color worth trying – especially if you have green eyes like me!

Oh, and I also finally broke down and bought the Anastasia Brow Whiz I've been wanting, and I'm sooooo happy I did! I LOVE the way it makes my brows look.

I used “Fabulous” from the Nude Dude eyeshadow palette for my inner eyes, “Fearless” to highlight my brow bone, and I used “Flirty” for as the main mauve color. The makeup I used is all linked under the final photo below.

I used “Feisty” and “Funny” to blend the edges of the “Flirty” color on the outer edges where I wanted it darker.

I've been experimenting with matte lip stains lately and really like this color from Sephora. It has major staying power! (I had a hard time taking it off at the end of the day. lol) Since darker lip colors can smudge easily, I made sure to use lip liner to keep everything in place.

If you're going to wear mauve eye makeup, it's best to stick with neutral/nude tones for the rest of your face–or carry on with the same mauve tones, like I did. Mauve doesn't mix well with oranges and many pinks, so I used mauve tones for my eyeshadow and then selected a blush and lipstick that also had a mauve/plum tint. If I wanted more of a daytime look, I would've left off the lashes and just used gloss with a light or neutral tint on my lips.

Sometimes mauve can be more of an edgy look, so it also helps if you focus on your skin and try to make it look flawless when you're using mauve makeup. I used a pore minimizer, foundation, and concealer for this look, which is a lot more makeup than I usually wear! I went fairly light with the foundation because I like for my freckles to show.

I hope you like the look and that my tips help! Let me know in the comments if you have any questions. 🙂 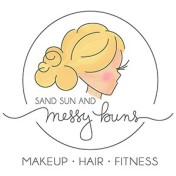 Hi! I'm Daisy, and I'm in my sophomore year of college where I'm studying fashion marketing and design. I'm addicted to playing with makeup and trying new hairstyles. I've styled my friends hair and makeup for homecoming and prom for years, so now I'm posting online tutorials since people always ask "How did you do that?!" Read more about me here! Follow me on YouTube.